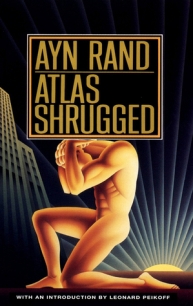 This is definitely a Main Course kind of book due to content and length.

Picture it, the Greek mythical god–muscled, bearded, (naked), and struggling to hold a world on his shoulders. He knows his math, astronomy, and is quite the philosopher—this is Atlas.

Now, what would happen if the person holding up the world were to suddenly shrug? A shakeup in normalcy? Full-on pandemonium? The probable end of the human race altogether? According to Ayn Rand, yep.

Now picture this, the world is dystopian, the U.S. is the only prosperous country left, and this success is hanging by a thread or rather a single railroad.

Against the backdrop of a broken New York City skyline, a country devastated by corruption, poverty, handouts, and roving marauders, Dagny Taggart, the V.P. of Operations of Taggart Transcontinental Railroad, and a few fellow business titans must fight to keep their hold of a crumbling society. What could be worse?

A brother determined to fight the success of his family’s railroad company, a government that is run by interest groups and shareholders, and the most exceptional and most gifted people alive (presumably) are disappearing with no end in sight. Can Dagny fix it? Can her railroad be the one thing holding the last shreds of humanity together? Well?

Well, she’ll give it her best shot.

I was intimidated to read this book. Ayn Rand is a brilliant writer with a renowned profoundly philosophical mind, not to mention the book is 1168 pages (not a typo, 1168 pages!) long! Although it held an exciting idea, and the characters are intriguing, at over a thousand pages, the story feels a bit rambling and often went off track (pun intended). Rand had the habit of writing three paged monologues throughout. Plus, whenever a book about the future, is actually written 63 years ago, ideas and sentiment behind the story is lost or at least feels watered down.

Overall, this is an interesting read, but I suggest picking up an abridged version to tackle instead. Otherwise, one may brag that they read a one thousand paged Ayn Rand book and survived!