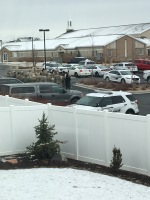 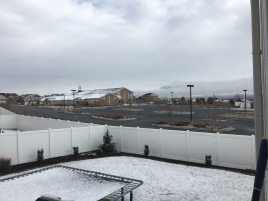 My favorite part of the weekday is in the morning around 7:30. It’s that sweet time of day after the buzz and commotion of getting people fed, packed, and out of the house is complete and all that remains is depleting anxiety-charged energy, the sound of an empty house, and Good Morning America on TV. It’s rejuvenating. It’s the time when I focus on the lists in my head—you know, that nasty to-do list that’s never quite solvable but is still worth attacking?
Yesterday was a little bit different. Yesterday I sat in my house as a large group of police officers drove and parked in the parking lot behind me. I don’t know what was going on. They were wearing camouflage and didn’t seem to be stressed out.
Over a period of twenty minutes, they drove in, parked, got in a group, and then left. It was a bit unnerving. It was even worse when they caught me trying to take photos of them.
At one point I was standing in my empty bathtub and trying to slip my phone in between the café curtain and the window without getting noticed. I have another one where I took one through some bedroom blinds.
I’m unsure if the experience was bizarre because of the sheer volume of how many cops, or SWAT or, whomever, were in that parking lot or if it was because I worked so hard to capture it! You be the judge!