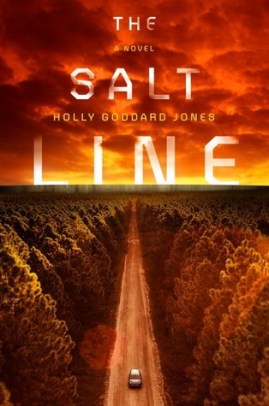 Picture a dystopian world in the not so distant future where the population exists behind giant walls. It sounds like a President Trump ideal, but in Holly Goddard Jones’s novel, The Salt Line, walls are used to keep out the most dangerous threat to humanity—not illegal immigrants—but ticks.

Ticks are the reason for tightened security. They are the reason that large, segregated zones keep people from traveling from one area to the next. With one bite of a female tick, eggs implant into the bloodstream, and death is likely to follow. So why would a group of successful and wealthy people decide to risk it and venture out into a tick-filled wilderness? Why would they pay money to put themselves in danger? According to Jones, it’s because they can.

Within days of their journey, the group comes face to face with the deadly insects and discovers another peril—being kidnapped by a community living among the ticks.
For me, this book was a roller coaster ride—not of thrill or suspense, but because it oscillated between hair-pulling boredom and intriguing out-of-the-blue plot twists. Whenever I thought about giving up—that I was going to pull the plug and find something else to read—that’s when something staggering happened. That is not what a well-written book is supposed to do—a reader isn’t supposed to continue reading because the twists are so much better than the rest of the plot.

Although the novel starts out strong, following Edie, (an accidental Rock Star groupie whose backcountry trip is paid for by her B-list singer boyfriend), by the middle Edie fades into the scenery. For the rest of the book, the limelight goes to a mismatched duo, Marta, and Wes. Two villains are introduced; a mild-mannered older matriarch, June, and her adopted, lunatic daughter, (who is thirty-six-years-old but acts like a gun-wielding eight-year-old), Violet. And then, Edie reappears as a strong character again by the end. The character switch-ups Jones practices throughout the story is extreme, and I wasn’t able to enjoy, sympathize, or cheer for any one character because of it. By the end, I didn’t care who lived or who died.

I suspect that Jones is an excellent writer and know she has won many awards to prove it. My conclusion of this novel, however, is that it was meant to be better than it is.

I’ve linked this into my Book Bites Main Course category due to it’s length and subject matter.