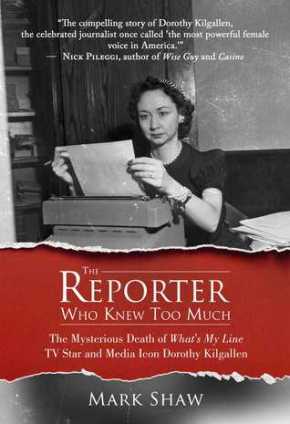 On Nov.8, 1965, a famed reporter and TV host, Dorothy Kilgallen, was found dead in her NYC apartment from an accidental overdose of prescription pills and alcohol. What was suspicious about her death, besides her being fifty-two-years old, showed no signs of being suicidal, and wasn’t known for being a pill-popper and boozehound, was the timing of it.
Kilgallen was watching television the day her good friend, President John F. Kennedy, was gunned down. She was watching the news when Jack Ruby then shot and killed Lee Harvey Oswald (the argued lone assassin of the President) in front of Texas Police and a large gathering of reporters. While the whole world was stunned by these events and the proximity of them, Kilgallen was outraged.

Her question was, why?
Why was JFK murdered? Why was Oswald, after killing the President and then a Police Officer, so easily found and coming out of a movie theater? And why did Jack Ruby then kill Oswald?
For eighteen months, Kilgallen investigated it all calling it a conspiracy and openly scoffing the Warren Commission’s theory and conclusion in her news articles. She had made connections and answered her questions. She supposedly met with informants and was often seen with a large folder of her findings and evidence. But when she was found dead, that folder went missing, and Kilgallen was forgotten.
Mark Shaw, a lawyer turned author, argues that Kilgallen was murdered for knowing too much and not being afraid to shout it out. Unfortunately, before she could, she was dead. Written in the tone of a 1940’s gossip column, The Reporter Who Knew Too Much is an intriguing new take on an old story that many believe has an incorrect ending, if only Dorothy Kilgallen would’ve been able to tell it.