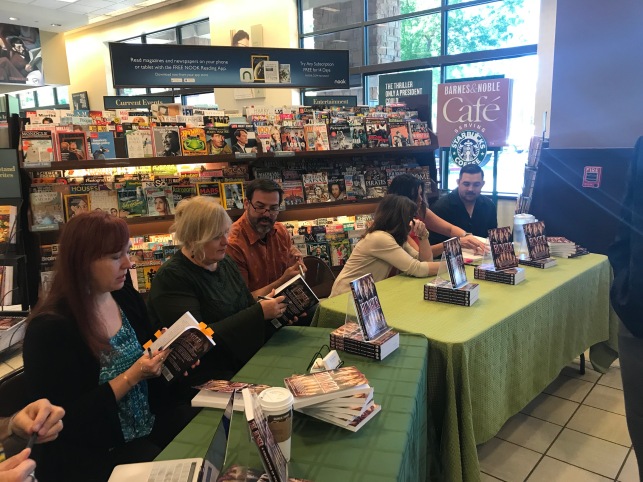 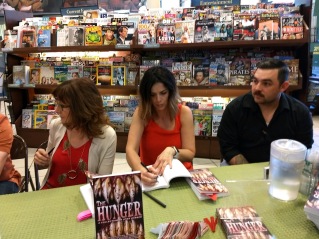 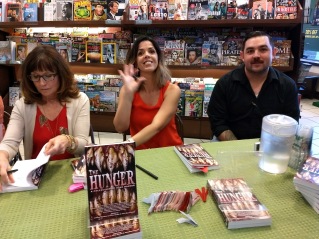 Last Saturday, I sat inside the entrance of a Barnes and Nobel writing my name in books—signing my book, actually. It was my first book signing, and I shared the limelight with seven other authors who wrote stories in a Horror anthology, “The Hunger.”

Some of the writers were more seasoned than others. Some even made their living writing books. I was dazzled by the event—my name and photo on a poster as advertising, stacks of my book lining tables, scribbling my John Hancock for people—some known, some not—who bought copies of the book my short story is in.

For three hours, all eight of us sat on metal folding chairs and in an assembly line fashion, took a book handed to us, penned our signatures, and passed it on to the next writer. It was exhilarating.

After a few hours, an author asked the question that I dread being asked at any and all writer gatherings. How long have you been writing Horror? I hate this question. I don’t know what to say. The writer next to me said he had been writing Horror for fourteen-years, and my measly answer was, “I write it accidentally.”

Accidentally. It’s a knee-jerk and padded response. I hate referring to myself as a Horror writer—there is plenty to suggest that I’m not, such as my blog that has nothing to do with blood and guts. The fact that I don’t read a lot of Horror, and the most significant monster-loving discrepancy, I love sparkly things—diamonds, glossy lipstick, and stiletto heels! See? All non-Jason-in-a-hockey-mask kind of things!

However, when it comes to fiction, every story I write doesn’t matter if it’s long or short, seems to end badly and not entirely resolved for the protagonist. That is Horror. So why can’t I own it?

Maybe it’s because I feel like I don’t know what I’m doing, like I’m heading in the right direction but assume my compass is broken? Or it’s because I don’t look the part? What would a female Horror writer look like—Stephen King in sky-high pumps? I thought perhaps writing Horror didn’t come naturally to me? I was wrong.

The first book I wrote and published was called “Janny’s Advent-ures!” I was in Mrs. Bruner’s third-grade class, and the hyphen in the book’s title was due to the lack of space. Sheets of pink paper were laminated in the teacher’s lounge on a contraption that would melt two pieces of thin plastic sheets together, creating the book cover and capturing “Janny’s Advent-ures!” forever.

I remember using my school scissors—small with an oversized loop for the thumb and pointer finger, and not sharp enough to cut water—and trimming down the plastic to the standard paper size of 8X11. The book was complete once all the pages were stacked and then shimmied in between a slotted black, plastic binding. It was beautiful. Voila, published book!

Under the title and on the bottom right side, I wrote my name, my school’s mascot, Bates Brave, and my teacher’s name, though misspelled. Along with the hand-drawn picture of the story’s protagonist—a girl with a wine glass shaped head, brick-colored pig-tails, nickel-sized eyes, and a ruby mouth too small to actually eat anything—is a golden seal with Weber Council Jr. Author Fair emblazoned and stuck to the front reinforced by three rows of scotch tape (most likely done years later and at out of concern about the sticker losing its stick).

Inside, the story is a jumbled plot of ripped-off Disney characters, and sketches with a likeness of the nineteen-sixties sitcom, “I Dream of Jeanie,” as well as a crayon replica of my Grandpa—bald with a ring of cloudy gray hair around his ears and round-rimmed spectacles.

I recently reread the story and discovered something startling; the tale is dark—burnt popcorn and ruined S’mores over a campfire—kind of dark. An evil witch turns a stick into a dagger and throws it into a prince’s heart, killing him. Janny’s father, the Miller, is thrown into a man-eating plant in the forest and then captured by flying monkeys. A genie-slash-fairy forces the Miller to use up his last wish to put a spell over the castle and save his daughter.

Meanwhile, Janny, shrunken down by the evil witch–whose corresponding picture looks suspiciously like the villain in Disney’s Snow White—puts the girl into a glass jar and suspends her from a single wire from the ceiling. The cable is so thin that if Janny were to try to escape her Mason jar prison, the wire would break, and the jar would crash to the ground and kill her. See? Dark!

What’s more, even though the prince is resurrected, via smoke, and the witch disappears through non-mention, there is no a happy ending. The prince doesn’t save Janny, ala-traditional Walt Disney, and Janny doesn’t marry the prince. The Miller doesn’t get to use his last genie wish to become a million-trillionaire, nor is Janny granted three wishes of her own. Worst of all, she doesn’t go back to her original size, ever—forever immortalized as being small enough to live in a jar of honey.

The fairytale I wrote when I was eight-years-old, written in struggling cursive, misspelled words, and lost grammar, is a Horror. What the? It’s strange.

In general, my childhood wasn’t dark. It wasn’t sad—for every birthday until I turned double digits, my mom made a birthday cake with a Barbie in the middle donning a delicious and glamorous frosting covered ball gown—and I wouldn’t classify my childhood as horrific! Yet, here I am, years later, writing longer stories, better stories, but still, Horrors “accidentally.”

I had always assumed my dark streak was tethered to the depression I developed as a teenager and just morphed into death, murder, happiness-depreciation and an increase of angsty poetry.

However, “Janny’s Advent-ures!” proves otherwise. I wasn’t sad when I wrote it. I wasn’t harboring self-doubt or career disorientation. I was just writing—creating a tale glued together by my experience—Disney-tainted and all.

So what’s different for me now? Why do I struggle with claiming to be a Horror writer? Why view it as an accident—a mistake that will be smoothed out into something else? Perhaps it’s because Horror wasn’t defined to me until much later in my life? Or maybe, I have always tried discovering who I was without realizing who I’ve always been.