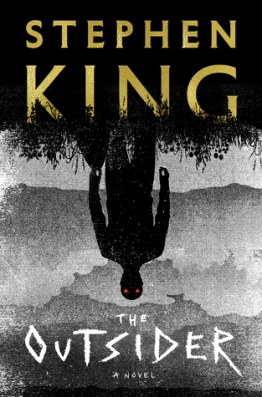 This is a Main Course type book just because it’s 560 pages long!

Typical of King, this book is centered around, Good VS Evil, however, at the risk of sounding blasphemous of the king of Horror, I wonder if this story would be better if the evil was actually a man and not just manmade, or if there was a need to have any men in it at all.

Terry Maitland is a respected small town Little League coach who is the main suspect of the gruesome mutilation and murder of one of his little leaguers. He was the last person seen with the child, and his fingerprints are all over the crime scene. It’s an open and shut case for Detective Ralph Anderson—except it isn’t. For as much as the evidence against Maitland is ironclad, so is the evidence to exonerate him. So what’s a detective to do? Follow the clues, of course. The further Anderson investigates, the stranger the clues become.

This book has pros and cons for me. Pro, in that King, is a magician when it comes to complex characters dealing with a murder. The female characters throughout the story prove this. They are sharp, smart, and witty. They are fabulous! Two main examples of this are Detective Anderson’s wife, Jeannie, and a private detective, Holly Gibney.

Jeannie is a favorite as the detective’s vocal conscience—think Jiminy Cricket to Disney’s Pinocchio. Holly Gibney is the brain of the operation although she is downshifted to be Anderson’s sidekick—even though she knows everything about everything about the bad guy and is the one who ultimately foils the evil menace’s plot to take over the world. And that’s the con of the book: There’s no reason for all the men.

Almost every male character in the book could be eliminated, and the story would still stand. On top of which, the evil presented in the book is one of King’s signatures—he’s a paranormal being—created by all the hurts, wrong-doings, and sadness this world has. My thought here is, instead of a legendary monster, why not make him genuinely harrowing and let the beast be a real human—maybe even a female?