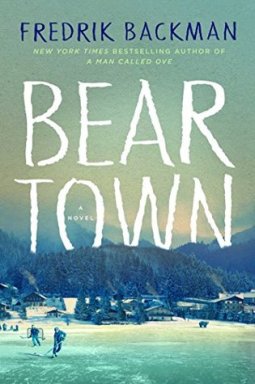 Sometimes the main course is supposed to be heavy–Try these two Main Course Book Bites!

If the people of Beartown had a code they lived by it would be to fight first and ask questions later. Living deep in the woods, Beartown residents are calloused, stubborn, and huge hockey fans. Their town is dying, Main Street is almost all but abandoned, however, there is one small bright spot in the town’s future—the Junior Hockey team, specifically, a talented teenager named Kevin Erdahl. So when Kevin is accused of rape, will the Beartowners believe it and risk the one chance they’ve got to revive their economy, their hope, and their past glory?
True to his ability to hold a reader hostage until every bit of print is read, Fredrik Backman is a master at creating relevant subject matter paired with complicated characters, plus, he can do it without alienating the reader by throwing in competitive sports! This novel is not just a book about winning or teams or community. Beartown is a book about who we believe we are and what happens when this belief is challenged.

Us Against You is the second book about Beartown and what happens to residents after an NHL hopeful is accused of rape forcing everyone to take sides. Some people believe Kevin Erdahl is innocent. Most think Maya is a liar. Others feel that Peter Anderson is just seeking revenge. And then there are a few who blame Maya for being in the wrong place at the wrong time.

When lines are drawn, and opinions are stated, everyone is caught in the middle.

Backman explores the reality of rape, the accused and accuser, stereotypes shattered in a small town, the characteristics of blame, and the aftermath. Us Against You, is a great book, though slower and more reflective than its predecessor, it still draws the reader in leaving them hungry to find out what happens after the dust settles.