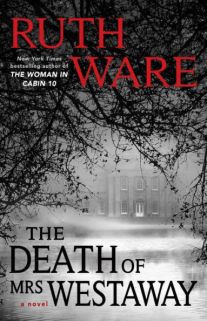 In the mood for a tasty dessert-type book? Read this!

Hal Westaway is alone in the world. A fake Psychic (in her own view), her ties to any other human being died three years ago with her mother. She has the man who gives her tea occasionally, and the threatening thugs, trying to collect her overdue loan. But other than that, Hal has no one. Until one day she gets a letter telling her that her grandmother died and that Hal had an inheritance.

Hal knows this is a mistake, her grandma died years ago. Perhaps she could become this long lost heir—Who better than a Psychic could get away with it?

A great read, perfect for the end of summer, I liked The Death of Mrs. Westaway. I was swept into the story from page one. Typical of Ruth Ware, the reader is transported into a world full of twists, turns, and suspense. The trick is, can the reader find her way back out again after the story is over?