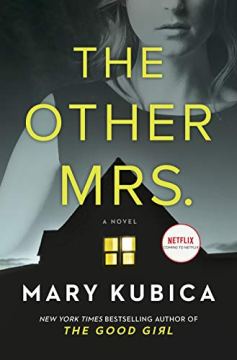 A Dessert Book that might leave you with a slightly upset stomach.

Dr. Sadie Foust can’t shake the feeling that something is wrong, and she doesn’t like it. In the name of getting a fresh start, Sadie doesn’t like that her family had to leave Chicago and move to Maine.

Add to the mix, Will is probably having another affair, the unknown woman down the street is murdered, and Sadie is the main suspect, what else could possibly go wrong?

In Mary Kubica’s Psychological Thriller, I found that I became obsessed. If the world around me wasn’t inside those pages, then it didn’t exist, at least until I finished reading the book.

This was a quick and fun read, a sprint from chapter to chapter, and a puzzle too mesmerizing not to solve. However, the thrill ride seemed to come to an abrupt stop at the end and left me wondering what just happened?

You tell me, what did you think about The Other Mrs.? Write and let me know!